skip to main | skip to sidebar

A Rare, Ready to Ship Creation 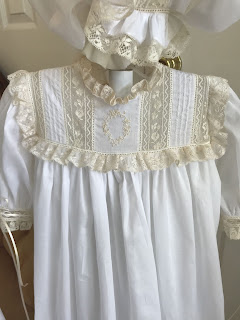 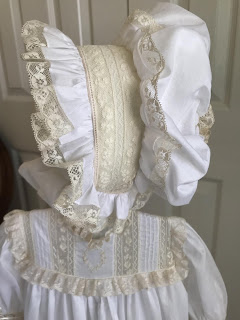 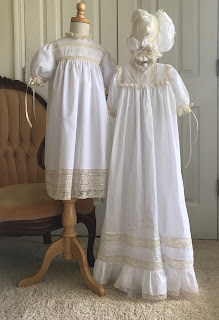 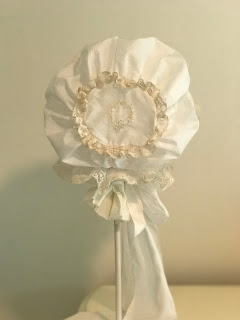 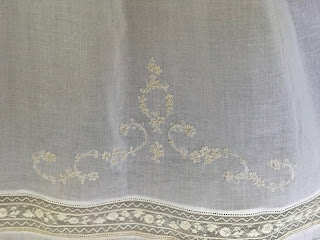 It’s rare that I have something this exquisite available without a custom order.  All of these garments were created by my two teenage daughters to help raise funds for a missions trip to Honduras next month.  The size 4 dress is 27” long and the 6-12 month christening gown is 36” long. These garments and bonnet are available individually or as a set.  Please email me with any questions.

Posted by Jackie at 2:28 PM No comments: 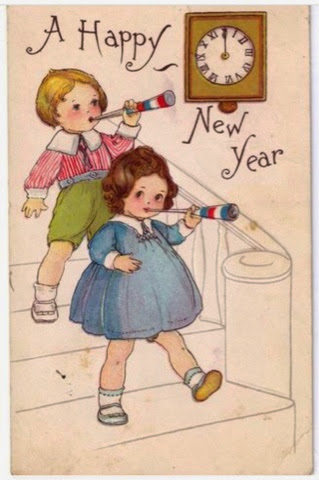 Okay, so technically it's still 2014.  So I'm early.  A very rare thing for me.
I just couldn't resist this vintage card when I saw the little girl in her smocked apron and the brother in his button-on knickers.
I hope each of you have had a wonderful 2014, but I pray that 2015 will be an even betteryear for us all!
Posted by Jackie at 1:30 PM No comments:

In EVERYTHING give thanks . . .

I originally posted this in November 2010.  I feel compelled to share it again, as this month marks the 20th anniversary of little Peggy's death.

Our church is currently preparing for the annual Thanksgiving supper referenced in this story. When I think of the many who will be ministered too during this event, I cannot help but be reminded of this little girl. 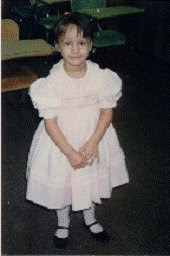 Thanksgiving is one of my favorite holidays - we have so much to be thankful for and too often take things for granted. I don't know if you're like me, but there are actually times that I feel guilty when I see how much food we have leftover at the end of the day and I think of those who have nothing. It saddens me to think of those who are alone and have no one to spend Thanksgiving with. Not a Thanksgiving goes by that I'm not reminded of a little girl, who didn't have all the blessings that most of us have been given.

I often tell people who ask, that I learned to smock and began sewing children's clothing when I was single and had too much time on my hands. I have always loved to sew and be creative, but in my early twenties I decided to learn to smock. At the time, I never knew how much sewing would become a part of my life. One of the first dresses I ever smocked and constructed is pictured above. It wasn't fancy - just pink batiste, which I probably purchased from Wal-Mart because I just didn't know any better.  The only dress pattern I had at the time that allowed for smocking was a McCalls pattern that had tucks on the sleeves and at the hem. The smocking plate is "Alice" by Gayle Meyers, which was the plate given to me in my smocking class and was the only plate I owned at the time.  But enough about the dress, let me tell you about the little girl.

The church that I grew up in (and still attend) has always had a large bus ministry that reached out to some of the most poverty stricken areas of the city and brought children to Sunday School and church. As a young adult, I was very unhappy attending the Sunday School class intended for single ladies, because I felt like I was in a roomful of "old maids". I have always loved children and enjoyed working with them, so I volunteered to teach a children's class. This is where I met Peggy. Peggy's older brother was in my 4 & 5 year old Sunday School class. I'll never forget the first Sunday she came to Sunday School with him. She couldn't have been more than 3 years old and could barely talk. I remember wondering how in the world a mother could put a baby on a church bus with complete strangers and send them to church alone. Now, with children of my own, it is even more incomprehensible to me.  Peggy began attending faithfully each Sunday with her brother. Most Sundays she was dirty and hungry, as were many of the other "bus kids". Because of this, we would always have cookies before our Sunday school lesson - nothing fancy, just those cheap, grocery store brand, creme-filled cookies. Peggy would always hang around a little bit after everyone had left to get a second helping on the cookies. In the fall, children were promoted into the 1st Grade class, but because of her very young age, Peggy got to stay in my class for a few years.

In the spring of 1992, I had just learned to smock.  I knew that a lot of children (even many "bus kids") would have on something special for Easter.  On most Sundays, Peggy had worn dirty, ill-fitting clothes, so I REALLY wanted her to have a pretty new dress for Easter.  The day before Easter, my dad (who drove the bus that picked Peggy up for church) drove me to the apartments where she lived. I remember being so nervous about how her parents would receive my "gift" and if they would even take the time to dress her in it on Sunday. On Sunday morning, she looked so pretty and was so proud of her new dress, and I'll have to admit I was thrilled to see her wearing it. I love the feeling of doing something for someone - not for praise or what they can do for you in return - but just for the joy of doing it.

By the time fall came, Peggy was six years old and was promoted to the 1st Grade class, but I still saw her faithfully every Sunday. She would come by for a visit after Sunday School to see if I had any extra cookies, and of course, I always made sure that there were a couple left over for her and her brother. A couple of days before Thanksgiving 1993 Peggy was in her place for the big "Thanksgiving Supper" hosted each year by the church. On the afternoon of Thanksgiving day, she was missing. Her body was found the day after Thanksgiving, not very far from her home, but as of this writing no one has been charged with her death.

I know that God has a purpose in all things. When I volunteered to teach a children's class, it was all part of God's plan. I'm thankful that God allowed Peggy to influence my life.  I only hope that I was as much of a blessing to her as she was to me.


Matthew 10:42 "And if anyone gives even a cup of cold water to one of these little ones because he is my disciple, I tell you the truth, he will certainly not lose his reward."


If you would like to learn more about the annual Thanksgiving supper, please visit www.gleniris.net
Posted by Jackie at 8:08 AM No comments: 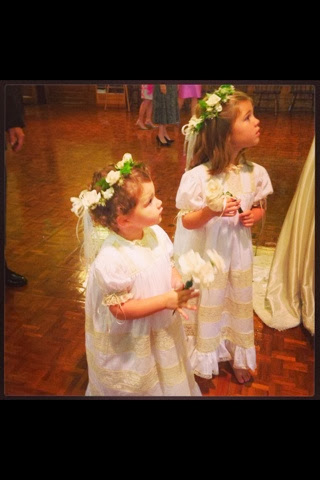 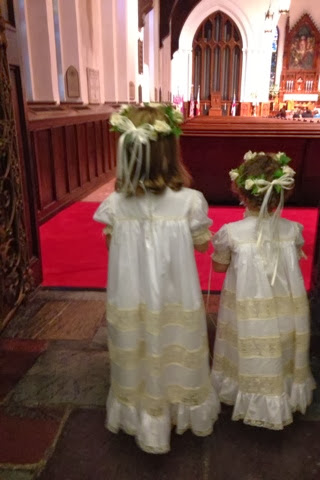 Seems I've been "sew" busy that there hasn't been much time for updating my blog!  I've intended to several times and something always gets in the way :)
These flower girl dresses were some of my most recent projects.
Posted by Jackie at 10:18 PM No comments:

Personally, I love Wintertime and snow,

but I do enjoy a little sunshine on occasion! Seems that lately we've all had nothing but cold temperatures, rain and snow so I thought I'd share a few "warmer" things. In case you're wondering, yes - those are pillowcase dresses that Sara and Anna are wearing and they are made from actual pillowcases. Now, I'm usually not a big fan of the pillowcase dress (although I've seen some cute ones) because I always enjoy a challenge, and well, they just aren't very challenging to me. These are even more rare (for me) because they are made from a pillowcase. Occasionally someone will ask me to take a perfectly good garment apart and make something else from it - I just can't! It's not my nature to destroy something that is perfectly good and useful, even if it is to make something else.
A couple of years ago while on a family trip to Gatlinburg/Pigeon Forge I found these linen pillowcases with a crocheted edging on clearance for $2.50 in a quilt shop. I must've been in a destructive mood that day, because I immediately thought they would be perfect for pillowcase dresses. They were constructed with seems on all three sides (instead of having been cut on the fold of the fabric) so I was able to remove seams and create a casing for the gold silk ribbon shoulder ties. I removed enough of the side seams to allow for an armseye. The good thing about this is that after my girls have outgrown them as dresses, I can remove my casing seam and sew all the openings closed again, and they can use them for pillowcases (I just love when you get your money's worth!) 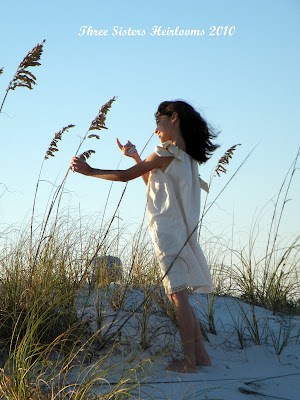 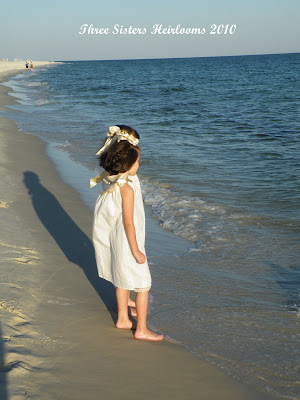 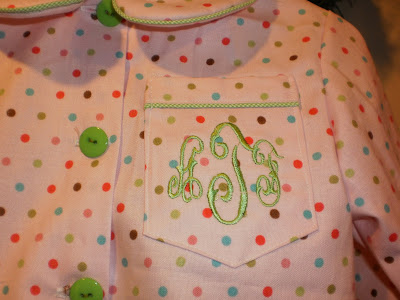 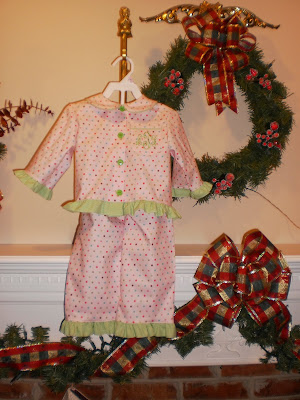 I hope that everyone had the merriest of Christmases! I'm still trying to catch my breath, as this has been the busiest Christmas season EVER for me. I haven't had a chance to post alot since Thanksgiving, but I did want to share these cute pj's. They were made using the Children's Corner Lettie pattern. The main fabric is a multi-dot on pink and it is trimmed with lime microcheck. The pocket (not included in the pattern) is monogrammed in lime as well. I made a matching nightshirt (Maggie's Classics) for baby sister of the same fabric combinations, but (oops) forgot to take a picture of it! I'm sure both of these little girls looked just precious on Christmas morning in their matching monogrammed pj's.
Posted by Jackie at 10:50 AM 2 comments: 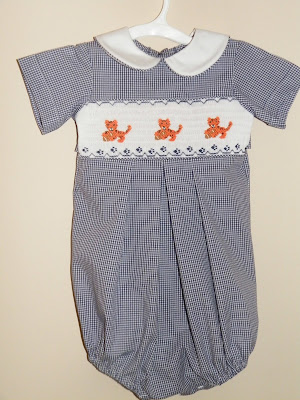 Labor day weekend is not just a three-day weekend - it's the kickoff of the college football season. Now here in Alabama, the hot question is "Are you an Alabama or Auburn fan?" I've lived in this state all of my life, and I feel safe to say that I'm probably in the minority - I'm not a fan of either team, I'm happy for whomever wins.

This baby bubble (by Chery Williams) is smocked with "Tiger Cubs" by Ellen McCarn and was made for a sweet little boy's very first Auburn football game.
Posted by Jackie at 8:49 AM No comments:

She seeketh wool, and flax, and worketh willingly with her hands. . .
I try to take photos of all of my work, but occasionally time doesn't allow. If you have a photo of your child in a garment I've made, I encourage you to share it on my Facebook page. I may at times use Facebook photos in a blog post, but I will never disclose names or personal information if I use your photo on my blog.

Jackie
I am a full-time wife to Roy and mother to Emily, Sara and Anna. I love smocking and heirloom sewing and have enjoyed dressing my children and countless others over the last 18+ years. I would love the opportunity to create a one-of-a-kind garment for your special little one.